Buy it on ebay – Whoop Whoop!

Then this could be the game for you and your family!… why Buy Throw Throw Burrito?

Throw Throw Burrito can be played with various types of people – mostly family and friends that don’t mind having squishy projectiles thrown in their general direction, or those of a raucous disposition! 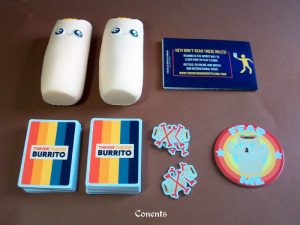 What is Throw Throw Burrito

Mix dodge ball and cards… That is Throw Throw Burrito. Now imagine playing it with a relative or a friend. Imagine their expressions as you have full permission to cob a small squishy toy at them and not have to apologise for it! I know, it is not often you get permission to throw a soft toy at somebody and everybody enjoys it, but in this ridiculous game you are more than allowed – it’s the name of the game.

And yes, it has been played with friends and they all loved it.

Why buy Throw Throw Burrito
– You get to throw soft squishy objects at your friends and family – enough said!
– It is also a card game
– It is fast-paced, fun a great for a wide range of audiences
– It is fairly easy to play.

Or purchase on eBay.